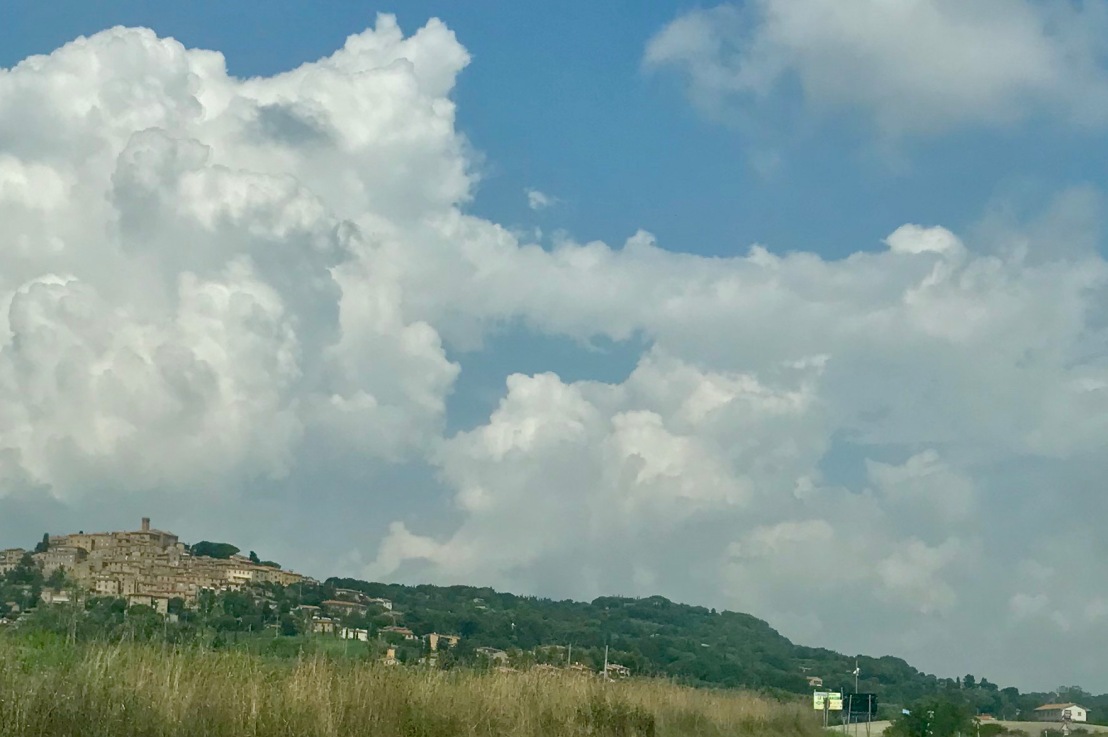 We took the Lancia POS southwest along the SR68 (and its many hairpin turns immediately after Volterra), and cut off after Casino di Terra towards Bibbona.  We passed tantilisingly close to Casale Marittimo, my favourite hilltop village, passed some nice scenery, until we found handy parking, just outside the town’s Zona Traffica Limita (or ZTL – the area which, if you pass its boundaries without licensed permission, will ensure you are fined a three figure sum).

It was a sleepy, pleasant place – probably affected by the August holiday, as we arrived there around 12:15.  We wandered around the old part of town, which is almost all residential and took some snaps.

It was a cloudier day yesterday, with high humidity, and so it was draining to be out in for a good length of time.

We were hungry, but the only place open in Bibbona was a family pizza place, so we took off for Bolgheri.  It’s only about a 6km drive, and I’d sussed out where to park, so it should be a cinch, right?  Oy… We got there and found car-parks rammed.  We had to drive the guts of a kilometer around the town, and park in an overgrown sports field, just beside the town cemetary.  I couldn’t believe it.  Bolgheri has a beautiful looking frontage – an arched entrance, which forms part of a well-kept castle.  I knew it was famous for its wine, and Niamh knew about Acqua di Bolgheri, an eau de toilette linked with the town.  But was I missing anything else?  Well, we’d see.  But first – food!

We strolled past the first restaurant and headed down the street until we hit Enoteca Tognoni.  I stuck my head in and saw that it, too, was jam-packed.  A group of four got a table ahead of us, and so we thought we’d try our luck.  We got in!  They put us at a table with 6 other people.  They had used low-dividers to split out large tables for multiple smaller parties.  And it really worked!  They had no printed menu, and so brought the blackboard in from outside.  Niamh opted for ravioli and I went for tagliolini with wild pigeon sauce.  With a tourist-driven place like this, they probably could have thrown out any sub-par crap on the table, but they didn’t.  Both our dishes were superb – so it’s a high recommendation from me, should you wish to brave the parking!

Lunch complete, we set about exploring the town.  And this is where my puzzlement came to the fore.  Sure, it’s a pretty enough place – but it’s a small, more or less unwalled village, of three parallel, short asphalt streets.  If it weren’t for the castle frontage, or the many cute arts & crafts stores and eatieries you would wonder how it gets the number of tourists it does.  The stores were pretty, and the quality of products very high (which was reflected in the prices!) – so maybe that was it.  Dolly-up your shops to get the visitors.  Maybe the real heros of the piece are the people who make the products, and the people who market the town!  I don’t wish to belittle it – and it’s definitely worth a visit… but I feel that’s because it’s so close to other towns in the area (Bibbona, Casale Marittimo), which are sufficient to make it a fun day out.  Just go early in the morning, late in the evening, or maybe an hour after lunch.  Arriving in time for lunch was a mistake on our part.

One other good reason to visit: Bolgheri Ti Amo/Caffe della Posta – a café and gelateria.  The gelato here was fantastic – take a bow, guys!

Here are some snaps of Bolgheri.

One of the highlights (see photo directly above) of Bolgheri is a 4km of perfectly straight, cypress-lined road. It’s impressive. We drove back and I took some distance-shots of Casale Marittimo and Volterra. We’ll go to Casale when we have guests with us.

As we approached Volterra, it began to spit rain – but it didn’t last long.  We chilled and Niamh cooked what was left of the mushrooms, panchetta and cream with bucatini.  I ran out to get some peas, so we’d have some freshness to cut through the richness of the other ingredients.  The result was better than the previous dish – it was really lovely!

We stayed at home all evening – sorry!

I got up this morning, and decided to keep my walk about town, specifically to check out the preparations that were being made for the medieval festival held this and the next weekends.  Some props were out and looked impressive.  I also took snaps of what I think are some of the contrada flags.  A contrada is a district within Italian towns.

You might have heard of the Palio of Siena – the twice-annual horserace?  Well Siena is split into 17 contrade (plural of contrada).  10 of these contrade are represented in the horserace, but the representative of the contrada is actually the horse, not the horse and rider together.  There is a fab documentary on Il Palio – check it out.  Anyway, the horse wins it – whether it is riderless or not – and the winning contrada goes a bit mad in celebration.

Volterra has a similar competition between the contrade, of which it has 8 (there used to be 12 or so 800 years ago).  It’s not a horserace – although it has its own Palio in October (racing a cheese-wheel through an obstacle course down one of Volterra’s many sloped streets).  We’ll sadly miss this – might have been a laugh.

Instead, there are flag waving/tossing and crossbow competitions to decide the winning contrada.  In addition, many of the townsfolk dress up in medieval gear and there are stalls featuring medieval skills (e.g. blacksmithing) and food & drink.  You have to change your Euros for a special currency upon arrival. We have limited experience of what happens, as it’s our first time here, but we’re excited to check it out!

You can see in some of the lower pics that they are putting together some of the props to give the town even more of a middle-ages feel to it.  Exciting 🙂

As I concentrated on the town, I didn’t check out what natural marvels were awaiting outside.  Niamh fortunately did, and captured Volterra on the edge of a layer of cloud.  Pretty spectacular!

No mad plans today, except to maybe go to the local Co-Op supermarket.  I have been tasked with cooking too.