I got up early before I had to give my time to other tasks and went out for a walk. What else is new. I am glad that I’ve gotten into the habit of doing this again, though.

You can find the full-sized version of it here.

I had some stuff to do during the morning, but when it was done, it was time to check out what was happening for International Bee Day in Volterra. This day (or 2 days, really) is to celebrate all things apian, with a view to promoting both the produce and the conservation of our buzzing little friends! There were some decorations about town, entertainment for kids and shops were promoting produce made using honey.

We headed out to check out Via Gramsci, as most of the action was taking place there. I don’t have too many photos as I was filimg instead. But we got a good look at some stalls and a little bee colony they had on the main stand.

But hunger quickly overtook us, and we did something we haven’t done too often, which was go to Del Duca for lunch! It was a gloriously sunny day, and had refreshing starters followed by pasta dishes.

The food was wonderful, and while it isn’t the cheapest lunch you’ll have in Volterra, it is worth spoiling yourself for sure! We skipped dessert as we had a fair feeling that we would head out later that evening. Plus I had to be back in the apartment to do stuff for the rest of the afternoon.

When I was free again, we headed out for food. First, we made a stop at L’Antica Velathri Café, as Pietro had a special honey-based cocktail that day. He was kind and allowed me to shoot the making of it. My anxiety was peeking at me, and it sometimes makes me a little clutzy. I made a damn nuisance of myself by getting in the way of waiters as they came back and forth with orders and emptied trays. The worst was when I accidentally knocked a wooden tray to the ground – it contained a stack of cards advertising the café. Pietro’s dad had to come and pick them up and restack them while I filmed. I felt a proper idiot.

Anyway, once the humilating part was over Niamh and I enjoyed our cocktails.

Here’s a video of the day – note that some of it was shot the next day.

We headed around to La Mangiatoia, who were by now recognising us freely! I don’t think they have a booking system – you rock up and either you get seated or you queue (or you leave!). Anyway we just had the one pizza each. Yes, I have to say this is probably the greediest we’ve ever been in Volterra on holidays. Next time we have a long-haul here, we’ll have to rein in the restaurant visits and remember what it’s really like to actually live here, as ‘normal’ people.

We tried Forst lager for the first time this holiday and can’t recommend it enough. It’s from the north of Italy, and it seems to have invaded Volterra. So now I have a choice between it and Moretti – happy days. Still no cider though.

I hope you enjoyed this blog. Please leave a like and a comment – I’d love to hear from you! 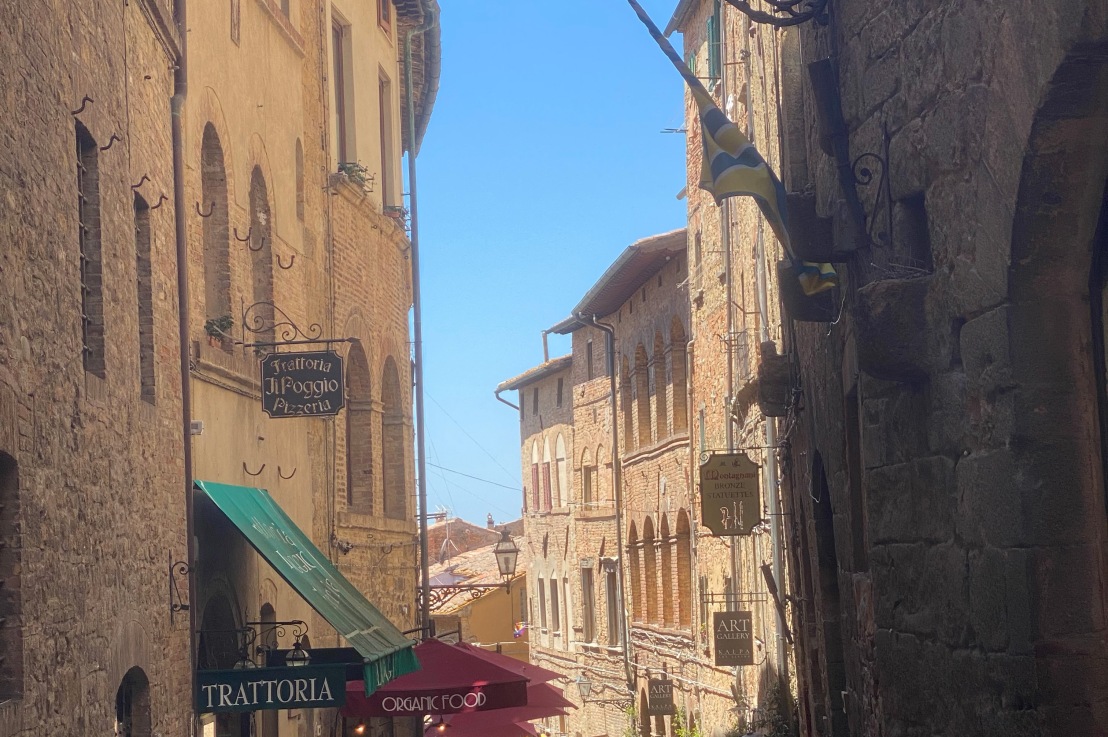 I had a shorter walk this morning, up Gramsci, bumping into Robbi, the owner of Terra di Mezzo, towards the end of it. We exchanged pleasanteries and I carried on. Only a few shots today:

My time wasn’t my own for most of the day, so I had to stay in. Niamh got to ‘enjoy’ the outdoors a little more on the terrace while she repainted the terrace railings and that lovely terracotta orange on the outside walls. Honestly, I dread almost anything DIY, so I was somewhat happy to have been stuck indoors while Niamh carried out this task. Thanks, hon!

We grabbed a quick mid-morning mindful walk around the park with a gelato. On the way back, we waved hello to Massimo, the owner of La Vecchia Lira. Our lives, you might have noticed, seems to revolve around food.

For lunch, Niamh made penne with an aubergine and tomato sauce she had cooked up previously and frozen. It was toothsome and rich. I usually shirk tomato-based sauces (which is why I enjoy Tuscan cooking so much – yes, that’s right, Stanley Tucci! Tomatoes are NOT actually a major staple ingredient in Tuscan cuisine), but this sauce was tasty indeed! I went to the framers to finally pick up the drawing I bought from Fabrizio, but discovered he only works half days. D’oh! I’ll guess I’d have to wait another day.

That evening, after I became a free man again, we had to choose between the two men I met earlier in the day. We chose over aperitivi in L’Incontro. We chose La Vecchia Lira as Massimo had seen us again from his restaurant and waved. Also, in the end, we over-ate.

We had a short walk to burn off calories and to catch the sunset, before heading home to screen-watch.

I had another walk this morning. I’m so proud of myself, to be honest. I had shirked somewhat on my previous few stays, so I’m glad to be back in the saddle, so to speak. This time, I walked a little longer than I had intended, but kept it mostly within the walls of the town.

After breakfasting and tidying myself up, I FINALLY managed to get Fabrizio’s drawing. We hung it up in the kitchen.

We just lazed about all morning, and then had lunch in Ristorante Etruria, in Piazza dei Priori. It’s a bit touristy, and is one of the few places that insists on limited table time during busy periods, which is rare. But there’s something for everyone here, and the food isn’t bad. In addition, they recognise us and treat us well – often presenting us with a half-bottle of Chianti to take home when our meal is over. If you’re ever there, and have someone who is a little picky with food with you, you should try it. Also, the inside seating area is lushly decorated and worth a quick view!

We then, rather unusually, spent some time walking about town. I say ‘rather unusually’ as (a) we know better than to walk around town during the hottest part of the say, and (b) we spent a couple of hours doing it! I took some snaps, sure – but most of the time was spent going from one part of town to another, and people-watching as the sun began to dip in the cloudless sky. It may not be the only way to enjoy Tuscany, but it’s one of the best: just sit back and enjoy the present.

I think I began to doze a little while sitting in the bench at Piazza XX Settembre! We had a gelato at L’Isola del… no, wait. We actually had it at Enjoy Café! I think they’ve upped their gelato-game in a the last year or so – it was actually quite good!

We rested back at the apartment, and when hungry again headed out to La Mangiatoia. I love the pizza at Pizzeria l’Ombra della Sera, but it just isn’t as lively as La Mangiatoia. To be honest, I don’t think I could have put a pizza away after the lunch I had. And you can’t share pizza in Italy. It’s a mortal sin. Although in La Mangiatoia, they actually make massive, family-sized pizzas, with multiple sections similar to a Quattro Stagioni (the family at the table next to ours was chomping on one). Anyway, I wasn’t up for it. Niamh was, but I had a burger instead. For those reading in Ireland, the burger here is the closest you can get to a chipper-style burger in terms of taste, if you fancy that!