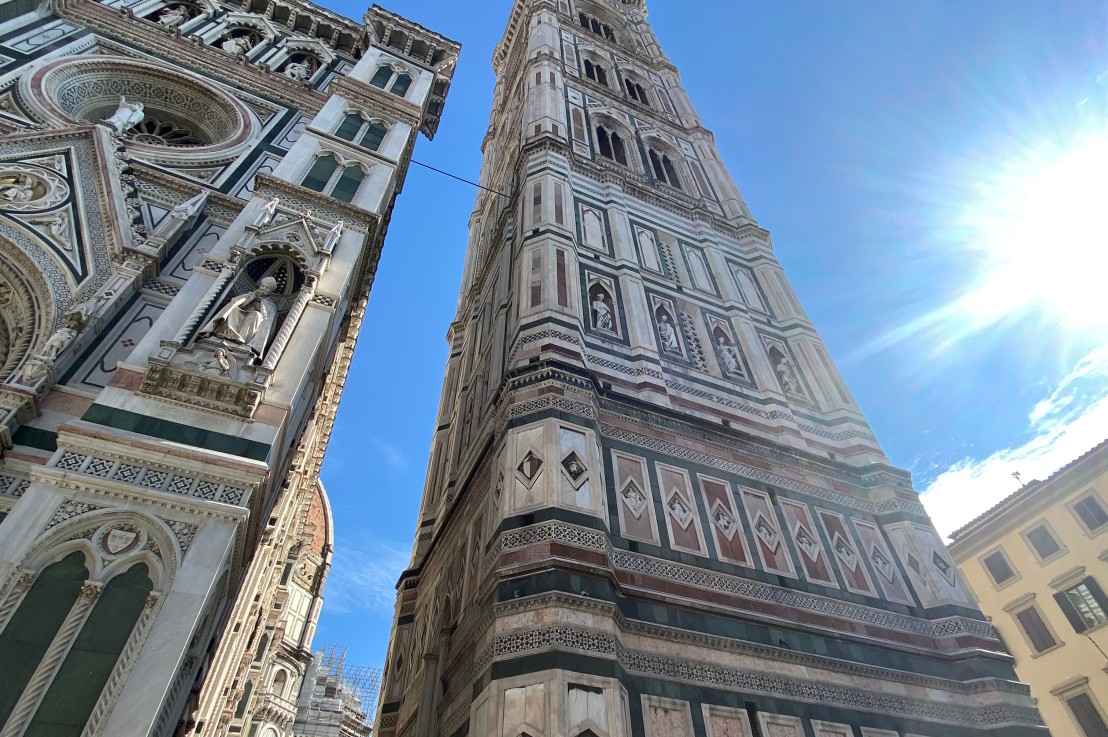 I chose not to walk that morning, as I thought we’d have a full day of it in Florence. We still didn’t leave ’til mid-morning. There are two main routes to Florence – one takes you through the countryside for the first two-thirds of it, as you head through some wonderful rural scenery, and emerge on more modern roads somewhere between Gambassi Terme and Montaione. We took the other route, which, although shorter in terms of time (just), is a little bit more dull. If you haven’t driven it before, then it’s a fine route, but annoys anyway, because it takes you so far south so you can join the Florence-Siena Autostradale, before taking you all the way north again. At least it takes you past Colle di Val d’Elsa, which always impresses.

As usual, we parked by this Coop. It’s free parking there, and is just beside the tram station which will take you into the heart of Florence in 12-15 minutes. There’s more about it in the video later on in the blog.

This time was a little bit special for us, though: it would be the first time we had taken any form of public transport since we started working from home due to the pandemic – around mid-March 2020. It turns out we weren’t freaked out about it. It wasn’t packed, but there were a still goodly number of people on it, and everyone was adhering to the mask-wearing protocol. I regret I didn’t take any illustrative photos.

We got off at Alamanni (the station for Santa Maria Novella), and it was another 10 minute stroll to the Duomo. Once there, unless you actually work beside the thing, it’s almost impossible not to be impressed by it. We papped our little hearts out!

We noted for the first time that there were armed soldiers outside the bell tower. We neatly skirted around them, and headed to the back of the Duomo. From there, we wandered around some back streets, stopping in a quirky stationery shop, in which (of all things) we bought some Christmas tree baubles. We were hoping to come back in December, and get a little tree for the apartment, so these would do splendidly. Then onwards towards Piazza della Signoria.

We had a look around (we’ve been there before) the square, and then went inside the Palazzo Vecchio to see what could be seen. The courtyard is pretty impressive, and it’s such a huge building. We didn’t have the time to go on one of the tours, as we had a lunch date!

We did have time to check out the Ponte Vecchio. That and the riverside were both busy and beautiful!

It was almost time to meet my friend. We wandered back towards the square on back streets, bypassing it altogether and heading down a narrow lane to find the osteria: Vini e Vecchi Sapori. It’s tiny on the inside, and seemingly with no space for seating outside. It was also almost completely full, so I wondered if my friend had taken the booking correctly.

I should explain the ‘friend’ part. I had actually never met this guy face-to-face. For years, we had played World of Warcraft in the same guild together, and kind of had similar senses of humour. I had his number and so gave him a call. He assured me he was only minutes away, and, a man of his word, arrived soon after. By ‘eck was he tall! That’s the problem with online friends – they’re like Forrest Gump’s box of chocolates. But within seconds we had bumped elbows (me reaching up slightly), and all three of us were comfortable. He then entered the restaurant and began rattling in Italian – pretty much fluent, which raised an eyebrow. I didn’t know he could speak Italian. I had assumed that, yes although he worked in Florence, he did much of his work online, and chose to settle in a town in which English was spoken by many. It turns out he’d spent many of his formative years in Rome.

Anyway, the restaurant staff recognised him immediately and gave him an effusive welcome, in cajoling Italian. He confirmed the booking, and said that we could eat inside, but that they also had a part of the north-east corner of the Piazza della Signoria cordoned off for diners. It was such a nice day out that we decided to eat outside and people-watch.

We had lunch for almost two hours. Three full courses and a glass of wine. We just chatted about personal stuff, how we found Italy, what we were doing generally, how the pandemic had treated us, and so on. I skirted around my anxiety issue, as I didn’t want to bum everyone out – we were having a good time. Working-from-home inevitably cropped up, and he was adamant he was staying in Florence, even after his boss asked him to work in the London office. He pointed out to his boss that he himself was working in Spain! I lamented that we might not be able to work in Italy, as most employers didn’t want the hassle of having to register for tax in the various countries in which employees were thinking of settling. Even if that country was also in the EU. Not that we are thinking of settling, as our Italian isn’t up to snuff yet, but it’s good to have options. He pointed out that after his employer registered in a few countries, they realised they had the unexpected benefit of now being able to hire people at will within those countries – thereby expanding their market for a potential labour force exponentially. An interesting point.

The food was excellent, but sadly I didn’t take many photos. There were pastas, fried chicken and zucchini, boar stews and tiramisu.

You know you’ve eaten well, when you get up for a multi-course meal, and only feel comfortably full – and this is how we felt. My friend brought us to a bancomat (ATM), as we needed to grab some cash. He pointed out the opening times of the bank – it only opened for 45 minutes after a lunch break that day. Nice work if you can get it, I guess. We got what we needed and headed back towards the Arno for a stroll. He gave us little tidbits of information in his very English accent. I have to admit I was a little jealous of both his skill with Italian, as well as his height!

We headed over the Ponte Santa Trinita to the less touristy Oltrarno, where he promised us gelato that, while may not be the creamiest, was among the most flavoursome you can find in Florence. We struck a south-eastern route at a 5-road intersection and wandered down a narrow lane until we entered a lovely, almost hidden, piazza – so small it could have been called a piazzetta, where a couple of bars’ outdoor seating was stationed. At another end was our destination: Gelateria delle Passera.

We got ourselves some gelato (unsurprisingly), and it was here that my friend pointed out Zabaione for the first time to me. I’d never heard of it up to then, and now since Christmas has passed, I can’t stop hearing about it! It’s a sort of a thick, alcoholic eggnog – thick enough to be eaten rather than drunk – and also used to dunk biscuits into. Niamh got a scoop of that, and it tasted nice enough. To be honest, while Niamh liked the gelato, I thought it merely ‘good’. The portion sizes were certainly small for the money, but the flavours natural and fine. Not as good as L’Isola del Gusto, but maybe I am biased when it comes to my favourite Volterran gelateria. In fairness, the setting in which it was enjoyed was lovely.

Shortly after, we walked back to the Ponte Santa Trinita, and said goodbye to my friend. It was a merry meeting, and I’ve no doubt we’ll see each other again in Tuscany! He did recommend Palazzo Pitti to us. We chuckled and said we were all too unfamiliar with it. We have wandered in front on it several times, and for some reason or another have never either entered it, nor it’s wonderful Boboli Gardens. But we would rectify that this time! Oh yes!

Once again, we wandered outside, and looked at the remaining light of the day, and the queues outside and decided against it, preferring not to drive home in the dark. We took some snaps, and with a shrug of our shoulders, Niamh and I vowed to each other not to visit it again next time we’re in town!

We decided to cross the Arno at the Ponte Vecchio – photography ensued here too.

We walked back to the train station and got on the tram back to the Coop carpark. It was much busier, as we figured some people were heading home from work (office workers, maybe), or shopping. Everyone was still wearing masks. We took a seat near the front, and an older lady soon sat beside Niamh. She was looking through printed photos, but let the envelope holding spill the contents to the floor of the tram. Naturally, Niamh gave her a hand to gather them back together (Covid bedamned!), and was then caught up in a mostly 1-way conversation in staccato Italian about the older lady’s family, where they were from (Calabria – followed by an explanation of where Calabria was), what they did on holidays etc. It was a lovely encounter, but a shame our Italian wasn’t up to speed enough to reciprocate.

Here’s the video of our day:

The journey home wasn’t eventful, save that Niamh slowed down outside a Chinese/Japanese restaurant in Colle di Val d’Elsa to see if I could snap the opening times. We never ate there in the end, but maybe some other time.

Instead, with bellies still a little full, we had sandwiches from Sosta del Priore.

And that was the day that was! Thanks for reading. Let me know what you think in the comments section – I hope you enjoyed the read.

Dedication – In Memory of my Father
I would like to decicate this piece to my Dad, who recently passed away. The last couple of years of his life were rough, as he was coping with Vascular Dementia. He always loved reading these blogs, and more towards the end the vlogs I recorded in Italy. His eyes lit up whenever he saw the old Italian towns, and always had high praise for the beauty and architecture of the places I visited. He never got a chance to visit Florence, and would have loved to have seen David. But at least he got to Rome.

I will miss showing him how much I love Italy, and I will miss him too.