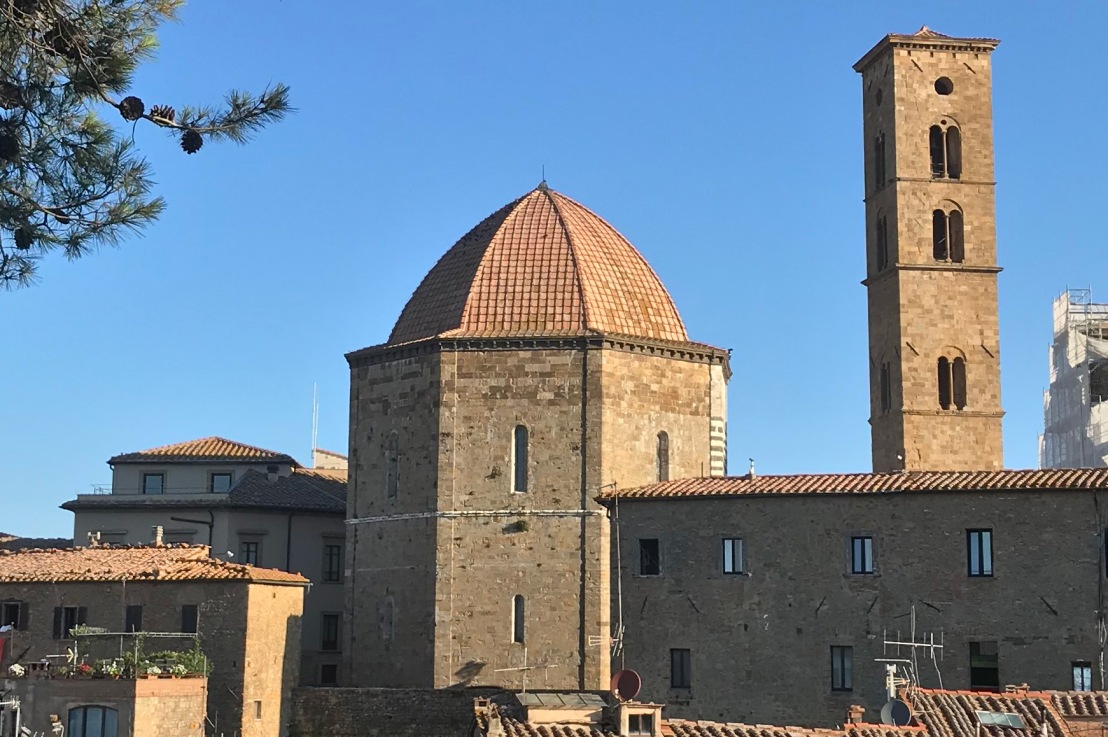 Nat King Cole once sang “Roll out those lazy, hazy, crazy days of summer…”. I guess two out of three ain’t bad, to quote another song. Yes, we had a slow day yesterday.

After screen-watching, we went to the Co-Op to buy food for the next couple of days, and refil our Chariot of Fire… well, it’s more a like a smouldering dustcart… with fuel. Fuel is damned expensive in Italy. In Volterra it’s about 20% more expensive on average than it is in Ireland.

We got prezzemolo (flat-leafed parsley) and peperoncini (chilies) for tonight, and stock cubes for future attempts and making Zuppa alla Volterrana or risotti/orzotti (the latter is like a risotto, but it’s made with pearl barley). Amongst other stuff, I also bought some deodorant, which I wore for the first time this morning for my walk – in order to prevent me being chased by flies. For a while I couldn’t put my finger on what it smelled like to me – then I had a revelation. It’s like the spice mix you get in digestif liqueurs – specifically Amaro or Jägermeister. Er, lovely?

About an hour after dropping shopping back up to the apartment, we went out to La Mangiatoia for pizza and beer! 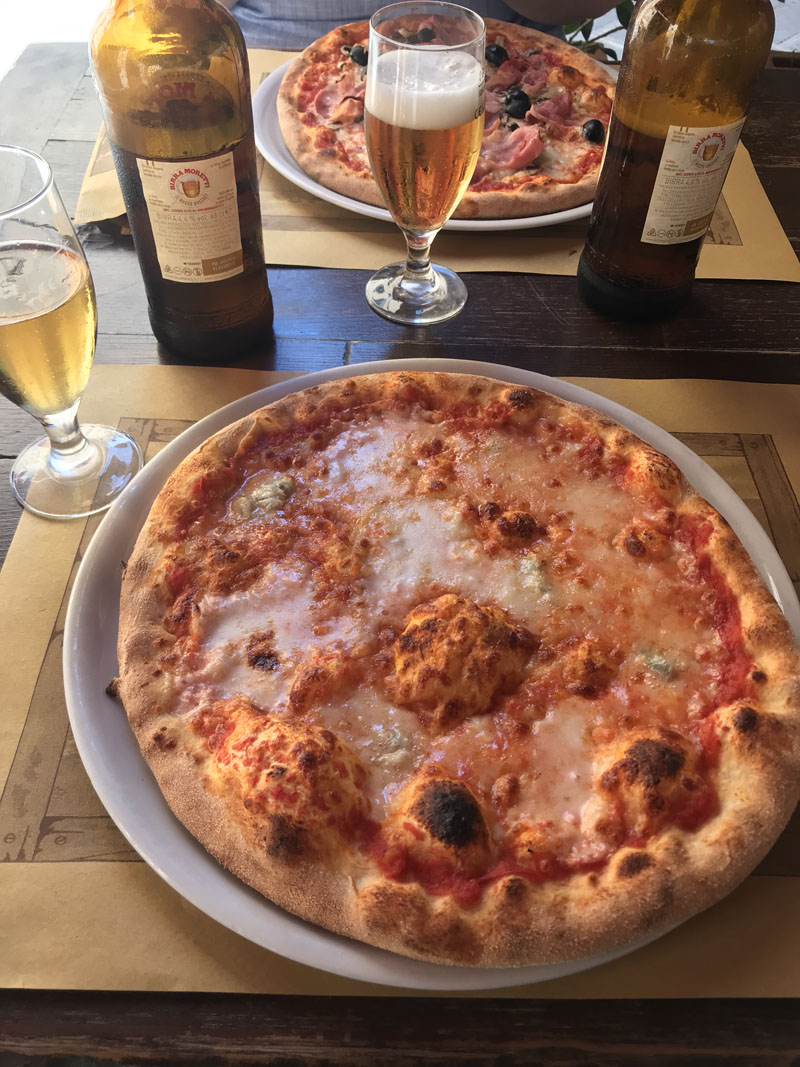 I had a 4-cheese and Niamh a cappriciosa, both were lovely – the second-best 4-cheese I’ve had here (Ombra della Sera Pizzeria being the best so far).  The Moretti were lovely as always.  They have large 660ml bottles of beer over here – slightly larger than your pint bottle of Bulmers (568ml). I’m not a huge beer drinker, but Moretti hits the spot.  A Sardinian beer, Ichnusa, is pretty good too.  But if anyone who lives local is reading this, could you please tell me where I could find some cider?!  I can’t believe it’s not popular over here, given the weather in summer!

Afterwards, we had a stroll around town and got some gelato from L’Isola del Gusto.  I got nutella & marscapone, and nocciola (hazlenut) – the first was great, but their hazlenut is a.m.a.z.i.n.g.  So creamy.

And so back the apartment, pretty much until the sun went down.  It took us a while to work up a hunger after the pizza, but at around 20:30, I rustled up my first all’olio, aglio e peperoncino dish (oil, garlic and chili respectively).  We had bucatini to use up, so we used that instead of spaghetti – but ideally you should use spaghetti.  I had a dread fear of over-salting since my last dish, and so didn’t salt the ingredients in the pan.  The result needed salt, but that was easily recified after serving it up.  It was yummy and I was well-chuffed!  Certainly better than I’ve ever had it in Ireland. 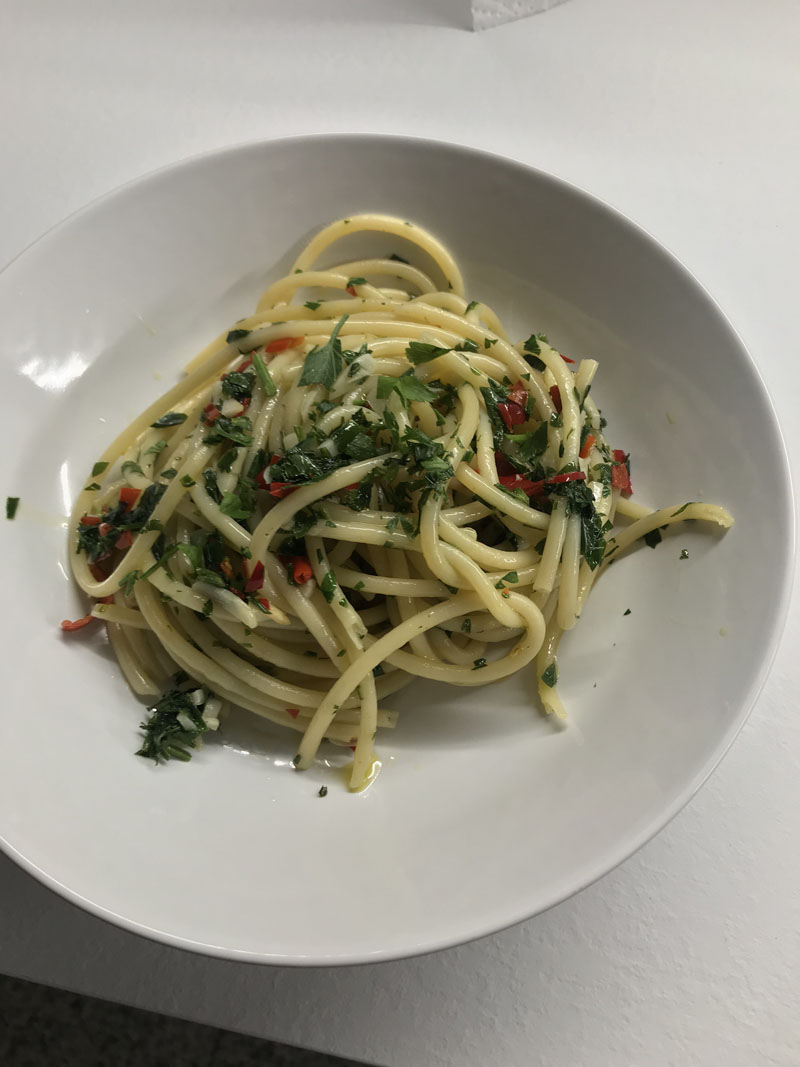 Niamh stayed in, while I went outside in search of free entertainment and a shnakey pint.  They had a band playing jazzed-up folk and avante-garde pieces in the Roman amphitheatre.  They were pretty good, so I hung around for a little while.

This moring I went on a shorter walk (about 2.75km) around, and just outside, the town.  In the cathedral square, a bunch of guys were unloading more props for the medieval festival, and the market was just about to kick off in the Vallebona carpark.   Bleecher seating was out in Piazza dei Priori, presumably for the performances of the sbandieratori (those who practice the art of throwing and juggling large, medieval flags).  They will be performing this Sunday, so I hope to get pics or movies.  For the very first time, I also walked through the graffiti-lined shortcut that cuts out an entire corner of town.

We were planning to go to Massa Marittima today, but with the market in the main carpark, those put-out residents are on-the-prowl for handy parking.  So if we left our spot, it could mean we’d have to spend a lot of time either finding/waiting for a spot, or parking in the arse-end of nowhere and having a difficult walk back to town.  We have tons of time, and so can go next week.