I took a day off blogging yesterday – apologies! You didn’t miss much from the day before yesterday… we stayed in town all day. We had food we’d had before and just lazed about. No wait… we will have a guest on Friday, so we had to buy and assemble a second fan. That’s as exciting as it got.

Moving on to yesterday, I skipped my usual morning walk and did a little writing, and after we’d breakfasted and showered, we got in the ‘car’ and headed off towards Massa Marittima – a gorgeous little town in The Maremma, an area in south-west Tuscany less frequented by tourists, but no less beautiful. It had been so hot the past couple of days, that, after we’d turned on the aircon, I sighed in huge relief; it was great to have some sort of ambient temperature controller, rather than just having to rely on fans!

I took a few snaps of the countryside on the way. You’ll see silver pipes running throughout the landscape in a couple of the shots. The area is geothermally active, and energy companies are using this natural resource. There is a hot debate (pun intended), between the locals in the area and the government in Rome as to whether geothermal energy is actually ‘renewable’, and therefore deserving of certain tax-breaks being given for renewable sources. I hope that the Tuscans win out, or it could spell trouble for the employment and businesses of thousands in the area.

We drove by Pomerance, Montecerboli and Castelnuovo Val di Cecina, and half-promised to stop in one of them on our return journey (we didn’t – sorry – some other time!). You’ll have to forgive the occasional reflection in the car window, and the filth of the windscreen.

We arrived, and parked in an area that was free-of-charge last year, but was €1 p/h this year.  We bought enough time for a little over 3 hours’ parking, and attempted to guess where the sun was going to go, in the hope that we’d parked in a spot that would soon be in the shade.  Then we headed up to the town… more hills!

We got up to the main square, and saw that works were ongoing on bleecher seats for their own medieval activities here.  In fact, there were drummers and pennant-folders marching within the town, but I failed to get a good shot of them.

We had a mooch around the shops to see if we could pick up any quirky, artsy objects for our apartment.  There was some nice stuff there, and not too expensive, but not fully to our taste.

Yes, that 13th century painting of a fertility tree does have penises for fruit hanging off of it.  Can we all be adults about it?  No?  Good 😉

A couple of cute restaurants were nestled up one of the characterful, narrow side lanes.  We chose one called Il Gatto e la Volpe (The Cat and the Fox – it’s not the most brilliantly kept website, sadly), you can see in the large picture above.  We sat outside at one of the small tables.  Niamh had bruschette and I had ribollita (a twice-boiled soup, thickened with bread).  Both were excellent.  Then we waited for our mains.  And waited.  And waited some more.  We always appreciate we are on ‘Italian time’ over here, and are usually chill about lengthy mealtimes.  However, that’s usually when we know we can have a few drinks and get back to our apartment.  Niamh was driving, and we had our minds on the parking ticket aswell.

About 45 minutes later we were told that our food would be arriving subito (immediately), and it came 2 minutes later.  Phew – well in time for getting back to the car in the end.  Niamh had large pasta parcels (I don’t recall their name), stuffed with ricotta, smothered in a minced beef ragú and I had pici with a white ragú – the meat was rabbit.  Again, the food was fab – I just had to watch out for bones in my ragú, which is often the problem with slow-cooked, stewed sauces, I have found.

We got back to the car, and found it in open sunlight.  I guess I’ll never make a navigator!  The temperature guage read 43 celsius in the car, so we had to let it cool down in the aircon, while we readied Google Map’s GPS for the journey home.

Again, I took snaps – including one of part of the older quarter of Pomerance.  When we got home (taking a quick photo of the workshop of probably Volterra’s finest alabaster sculptists), I had an icecream from L’Incontro.  They had coconut – one of my faves!  It was needed too, as the forecast was for 29 degrees, but it was 33 when we returned.

Tired, we lazed about the apartment and watched a bit of telly.  I’ve started watching Santa Clarita Diet on Netflix.  Not bad at all, although if you’ve got a queasy disposition, maybe give it a miss!

Still, it wasn’t enough to put me off my food.  We wondered what we were going to eat in the evening.  There was pasta and some leftover veggies in the fridge – and some vacuum-packed grilled peppers.  But while I am not a fan of wasting food, I also hate just throwing crap together on a plate to get rid of it.  Recipes were invented for a reason, and I want to enjoy what I eat!  Sooooo… we, um, did this: 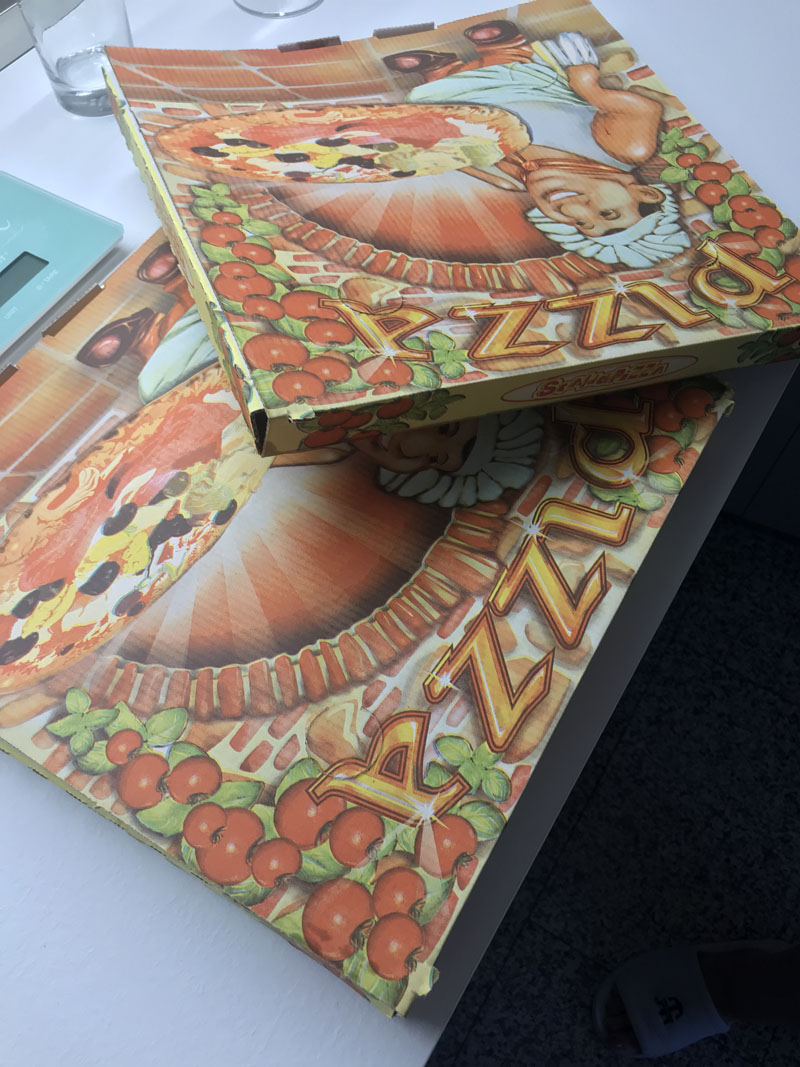 After more telly, we went to bed.

I got up, put the smelly organic trash out, and walked a route I’d walked before – past the prison gate, down through some shortcut steps to the road that would lead me to Volterra’s best free carpark (by the Docciola font).  I walked up the steps and was reminded of something else I’d seen on my previous walk of this route.

On the Friday before the Medieval Fair, I’d walked up some of the steps that led to Docciola, when I saw two women at work near the top of the flight of 200 stairs.  They were pulling weeds in time for the large influx of fair-attendees.  Turns out they did it for the other staircase too.  That was a pretty Herculean labour – well done to all who managed to do this in the time allotted!

No firm plans today, except that I might get my hair cut.  The experiment to see how we could live, and I guess all the mundane stuff is part of life.

See you next time!