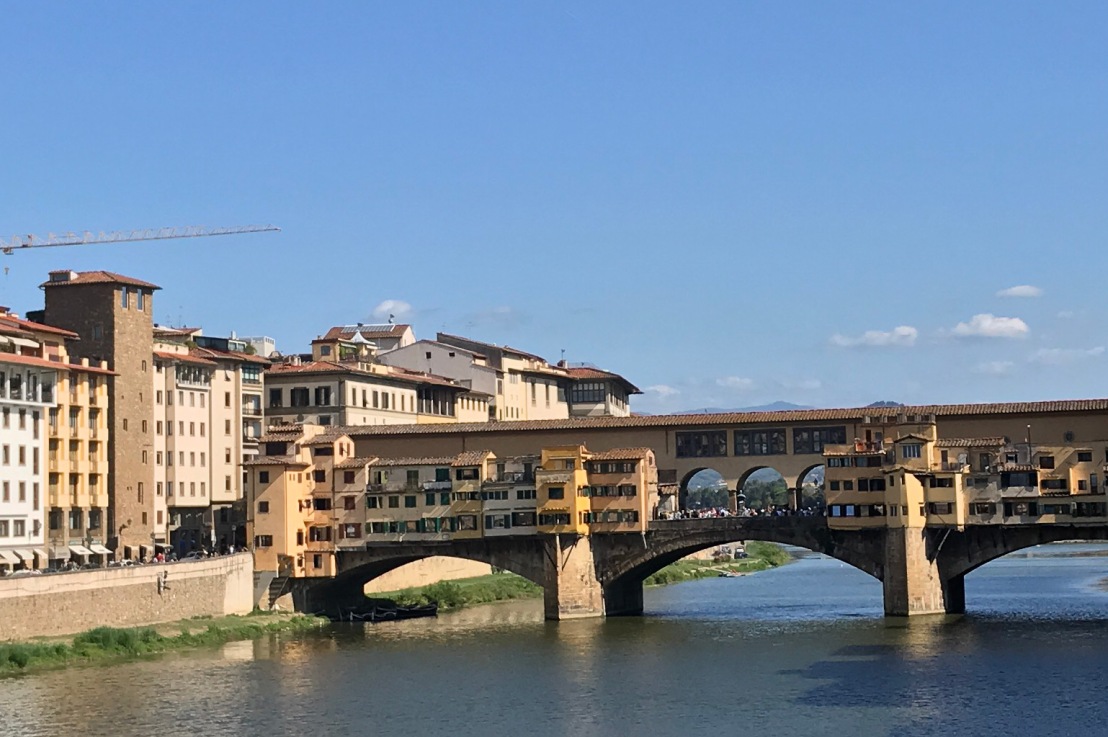 Well, we found a decent place to park in Florence, which acts as an unofficial Park and Ride for line 1 of their tram system, so I was able to bring you this update!  Note that it’s photo-heavy.  Note also that we didn’t enter any of the attractions, as we’d been in Florence a couple of times before and had already hit most of them.

We probably left a little late, and instead of taking the dual-carriageway route, we went via the Pisa road, and a scenic route.  Some parts of it are really lovely, and it offers a much less-stressy approach to the CoOp carpark, but it is a bit longer than Google Maps suggests – maybe 15 minutes longer.

I took some snaps along the way, but Mr. Sun, God bless him, did his level best to screw up my shots, as I was facing him for most of the route.

The carpark is for the CoOp on Nenni.  It is completely free, but to get to town, you have to get the tram to the central train station, and walk a little from there to the more popular attractions.  You pay for tram usage by time, rather than by number of stops.  We selected the base ticket (90 minutes) both there and back, and it only cost €1.50 per person for each journey.  What we forgot to do (on both legs of the journey) is to validate the ticket using the machines inside the trams.  You run the risk of getting a fine if you don’t.  We got lucky.

Anyway, we got off at the train station, and walked through the underground shopping centre and a street or two, to hit Piazza di Santa Maria Novella.  Despite spending 5 nights in the city a few years ago, I don’t think we’d ever been here!

Onwards, then, towards probably the series of chief attractions in Florence: the Cathedral, belltower and baptistry of Santa Maria del Fiore.  The architecture is stunning, with incredibly detailed doors and columns.  It is one of the most impressive things you’ll see in all of Tuscany – really… the outside of the Pisan square simply aren’t as impressive (although they are amazing – it’s just that the cathedral in Florence is a cut above).

The baptistry in that last photo looks bizarrely skewed… blame the camera on the iPhone.

Anyway, having been blown away by that, we marched on to Piazza della Republica.  A gorgeous square indeed.

We went on, then, to the Mercato Nuovo and the Fonta del Porcellino. You’re supposed to put a coin in the boar’s mouth, to let it fall through the grate below, and then rub the snout for good luck.  While some tourists were attempting that, a beggar woman sidled up and grabbed every coin from the font, before wandering off again.

We were both feeling a little peckish by now, but decided to go to the Piazza della Signoria – really the main square of government in Florence – or used to be in the Medici’s days.

Here you’ll find a ton of statuary, including Neptune, Hercules, a copy of David, moulded from the original, and Perseus holding aloft the head of Medusa.  As well as that, of course, you have the main building of government (back in the day at least): the Palazzo Vecchio.  If you’ve been following my blog, you’ll notice that it’s a cheap knock-off of the Palazzo dei Priori in Volterra, the design of which predates it by about 300 years.  Florence’s palazzo was begun in 1299, but owes its current appearance to the Medici, who rightly thought Volterra’s equivalent looked snazzy.  I say ‘cheap’ with my tongue planted in my cheek: it’s an impressive building, and the inner courtyard is fabulous.  We haven’t get visited it, and it sounds like it’s worth a good explore, based on what I read about it.  Maybe some other time.

What else would you dine on in Florence, but Chinese?!  Yeah, it had gotten to that stage again where we craved something oriental, and so gorged ourselves in Il Mandarino.  The soups we had (won-ton and sweetcorn) were nice, and the steamed dumplings excellent.  But the mains were so-so, with Niamh’s chicken satay not really tasting of peanuts, and my chilli beef tasting more of toasted sesame than chilli, but was still tasty.  Our accompanying veggies were nice enough.

After filling ourselves to the tops of our throats, we waddled south through the streets, until we hit the Arno river, and made our way to, and across, the fabled Ponte Vecchio.  Niamh stopped here briefly to pick up a mask to go on display with the other mask we bought during Volterra’s medieval festival.  It’s a lovely little walk, with shops hanging over the sides of the bridge, all decorated externally like medieval shops.  There is a gap halfway over, so you can look east and west along the Arno and take snaps.

The south isn’t as dramatic as the north, but a small explore is recommended, if only to at least see the enormous Palazzo Pitti.  We had thought to enter and walk around the gardens there, but lazily we gave it a miss and continued exploring the south.

It was gelato time, and up to now we had been avoiding most gelaterie in Florence, as we had a fair idea it would be sub-standard.  We’ve been told that a pretty good rule of thumb is if you see the gelati piled high, don’t go in.  We went instead to the Gelateria Santa Trinita, and if you go, you too can be served slightly above average gelato for 30% higher than you’d pay in Volterra, and have it served up by a tall, attractive young lady whose hobby appears to be eye-rolling.  Fun times.  Still, we could sit on a bench within and it did its job of cooling us down.

We’d begun clock-watching and so decided to call it a day.  We strolled back to the north side, to the train station, stopping to take photos.  We found a couple of the ‘no entry’ street signs so wonderfully ‘adjusted’ by a dude call Clet Abraham.  He gets wind of a new sign, has his changes already cut out and ready to stick to it, cycles to it and sneakily rubs it on.  It’s quite illegal, but he’s never been ‘caught’… I suspect the authorities are pleased, as it adds another bit of character to a town already overflowing with it.

We took the dual carriage way home – a road that bridges Florence and Siena.  We came out at Colle di val d’Elsa, whereupon the road became instantly familiar.  It’s a shorter route, but not as scenic and involves a bit of an annoying rat-run through some of Florence’s streets from the CoOp carpark to get to it.  As it was the evening, Mr. Sun trolled me from the other side again!

We didn’t do or really eat anything that evening, but just relaxed and screen-watched.  This morning, I got up and had my first walk in 3 days.

You know it’s the end of holiday season, when they start setting up the Saturday market in the main and cathedral squares.  Ah well… all good things must come to and end, as they will do this day next week when we fly home 😦

Not too sure what today will bring, but thanks for reading about yesterday!

2 thoughts on “A Walkabout in Florence”