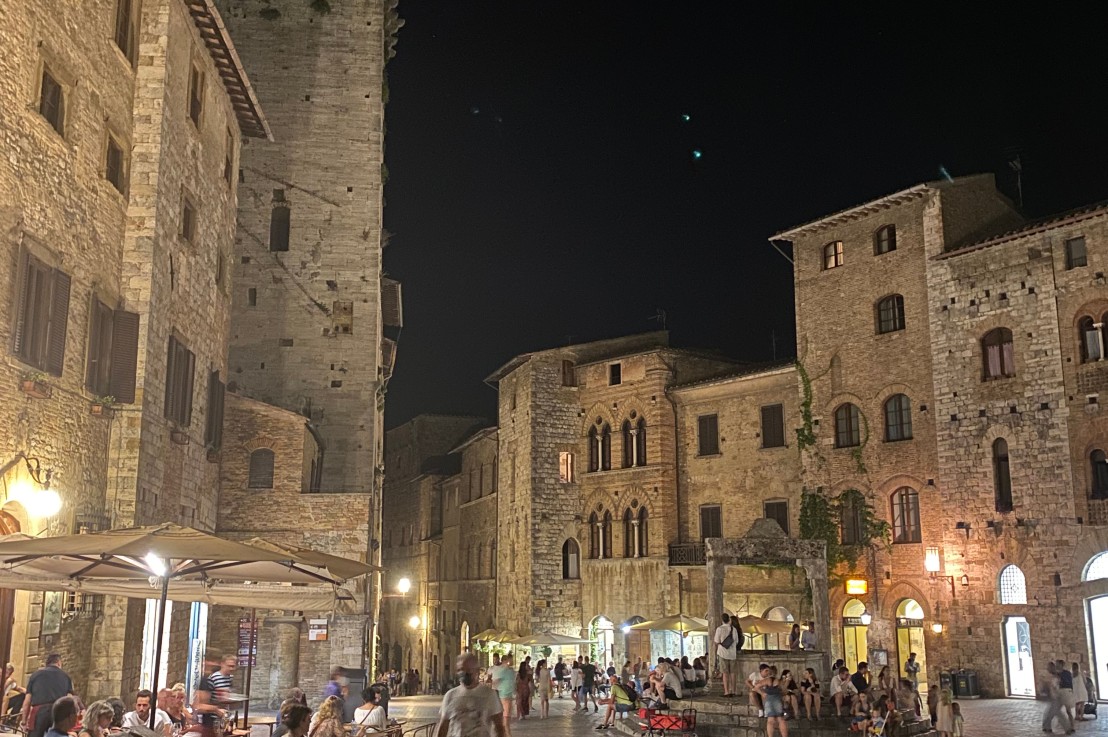 My brother and I got up, left the trash out (bio waste and plastic/metal), and turned right to head towards the square. From there, we toddled down towards Porta San Francesco and headed down Santo Stefano and San Giusto to explore there, and check out the Balze.

Then we hit Borgo San Giusto, with its huge church.

Towards the Balze the town begins to look somewhat old again. The original Etruscan walls which once surrounded Volterra actually stretched this far north. The walls contracted in later years to make the town more manageable to defend. We’re still on a butte, so there are some wonderful views to be had along the Balze walk.

We walked back past the Balze Camping grounds, the Witches rock and Conad supermarket, and we must have gone to get pastries… why else take a photo of the 200 Docciola steps?

I shot some video of the walk, which you can see on YouTube!

Regrettably, I don’t recall much of what we did during the day, apart from upload the source videos to my laptop, so I assume it was a restful screenwatching/writing/gaming one. I can’t even remember what we had to eat. That’s a bad sign for me indeed. I am assuming it was light enough, as we wanted to take my brother to San Gimignano that night for a dinner and a bit of an explore.

Guess what mistake we made again? Yes, that’s right – we didn’t book any table. And if there was one place more difficult in the locale to get a table than Volterra, it was San Gimignano. The visit started off well. We had to park all the way back in P4, but got a spot anyway. On the way to look for a place to eat, we took a few snaps.

We tried a few restauarants along the way, including La Mangatoia, Olivieri and one a little way off the main throroughfare: Perucà. Sadly, we couldn’t secure a table, but had to opt (once again) for a restaurant which never fails to break my heart whenever we’re in San Gimignano. I won’t name it. It’s in a prime location, but the service is so-so and the food quite below average. Just look at Google ratings before going anywhere.

They didn’t disappoint this time either, in that they *did* disappoint. It took us ages to attract the attention of a waiter to ask if there were any free tables within, and eventually we were shown to one (thanks to the assistance of a tourist group whose Italian was better than mine). Alarm bells were immediately rung, in that although San Gimignano was reasonably busy (I’ve seen it way busier!), and there were no tables in any other place, this restaurant was half-empty. We had so-so pasta and Niamh and I a so-so steak and then we ran out of the place.

I know I like to beat up on San Jimmy as a bit of a medieval Tuscan Disneyland, but in fairness to the place it is the town that really made Niamh and I fall in love with Tuscany back in 2008. It gave me the dream of living in a Tuscan hill town. I mean, look at it!

We missed the turn for heading back home via the most expedient route (via Castel San Gimignano), and were taken home via the much more lonely, and therefore darker, SP62. That’s the second time that happened. I was driving, so Niamh could have a drink, and I can’t say it’s the most pleasant route in the dark. I’m sure it has some spectacular sights in daylight though – I must give it a go sometime.

Thanks for reading. If you enjoyed this, please leave a like and a comment. I’d love to hear from you.