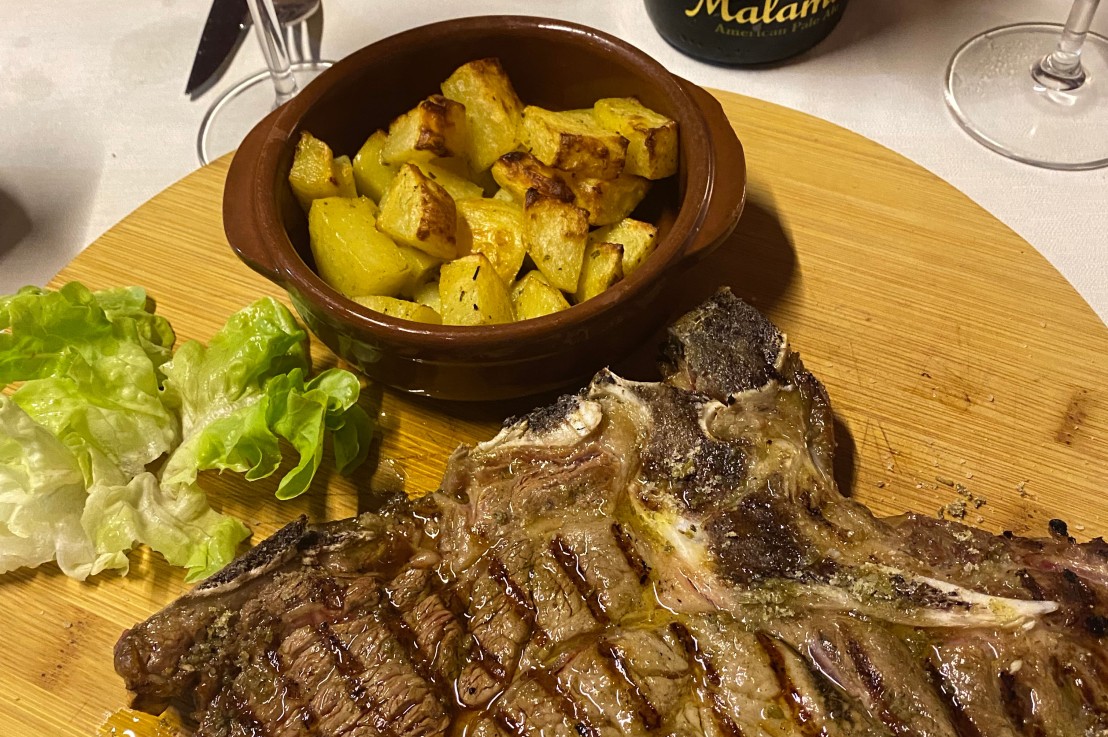 We had another relatively light day today. No travel at all, apart from the morning walk. I dragged my brother all over town! Check out the shots.

If I recall correctly, I actively sought hills on the inside of the walls we could go up and down for a cardiovascular challenge. There are no shortage of those in Volterra!

And although our coverage of kilometers was light, we got a good workout!

We even took in the park, before heading back to the apartment, via the fountain and panoramic view.

We stayed in and vegged. My brother and I were brave enough to venture out for the team later to grab some lunch at La Sosta del Priore. I introduced my brother to Ilenia and had reasonable success conversing in Italian. I still have a long way to go, though!

We didn’t eat the sandwiches in the street, but took them back to the apartment to have outside on the terrace. Then we did what we do best: vegitate.

That evening we hit Terra di Mezzo for a bite to eat. I love this place. The food is good, and we have good rapport with the owner, Robbi, and the waitress, Aurora. Most of the time something memorable happens – and tonight was no exception.

I got the Zuppa alla Volterrana, and a steak. Sadly, I can’t remember what the others had. However, what I *do* remember is what we drank. Niamh and I each had 500ml (un mezzo) of white and red, respectively. My brother isn’t a wine drinker, and the restaurant only had craft beers available, so he opted for one of those.

It came out in a pretty fancy bottle, and had a slightly citrusy tang, the kind you might expect of a wheat beer. It was really nice. Because he liked the drink, and that the prices weren’t on the bespoke menu, my brother looked it up on the web. He found that the brewers were selling it for €48. Our jaws dropped, and I just kept thinking there’s no way Robbi would let us order one of those without telling us first! And to be honest, a little of my anxiety kicked in. I looked up the site, but it was a little poorly laid out and seemed to confirm that was the price. Anyway, we enjoyed the meal and had a bit of a laugh at my brother’s expense. So much of a laugh, in fact, that he ordered another one halfway through the food!

I couldn’t believe it. He was thinking ‘In for a penny, in for a pound!’

I stopped eating to have a look at the shopping page again. I climbed back up, from that page and saw that the main shopping site indicated that 6 bottles came in a crate, and the crate was €48. To be sure, I called Robbi over, and asked him for the price of the beet. If I recall correctly, he said it was €8.50. Expensive for a beer, but not the kingly price we had originally thought. I explained to Robbi what happened in my broken Italian, but he must have understood me, because he cracked-up laughing.

At the end of the meal, Robbi came out to us when we had paid the bill, and told us to wait. He came back out a couple of minutes later with a little cube of a parcel. We thanked him and got home, and then opened it.

Of all the things we could have guessed was in it, I would never have guessed this in the middle of a stinking-hot August: it was a snow-globe. Then I remembered that we had told him of our plans to return for Christmas, so it was actually quite a thoughtful little gift – and it is the first Christmas decoration we owned for our apartment!

We went to bed soon after, as we had a cool day of travelling planned ahead for tomorrow: the Crete Senese and the Val d’Orcia.

Thanks for reading! If you enjoyed it, please leave a comment – I would love to hear from you.