We drove 35 or so minutes from Volterra to La Rosa to check out (no pun intended) the MD Supermarket there. We were a little disappointed – no intrinsic fault of that supermarket itself – when we got there, and found out that it’s a bit of a reverse-tardis: it’s smaller on the inside than it looks on the outside. In fact, it isn’t much bigger than the Co-Op Supermarket we have in Volterra.

One slightly curious thing about supermarkets in Italy, and their fresh produce: it is considered both rude and unhygenic to handle fruit & veg without using the disposable plastic gloves (so nicely modelled by Niamh in the photo below), even if you’re handling stuff to put in your own basket.

In fact, our own local grocer’s has a sign saying “No self service!” – they pick out the produce themselves for you.  I guess they know where their hands have been!

Anyway, we picked up stuff for lunch and dinner (which at least seems to have been more inexpensive than other shops) and went straight home.

Lunch was a series of cold-cuts and cheeses.  With added balsamic and a truffle-enfused honey, I had a plethora of flavours on the plate – from creamy to earthy, from fresh to salty and sour.  Yummy.

We had a bit of a kip after lunch, and then ventured outside again.  We had to get wine refills.  On the way, we stopped into a bookshop and antiquary to check what it had.  We were greeted very enthusiastically by a thin man, who took it upon himself to talk rapidly in Italian to us, while miming everything he was saying.  We told him we were Irish, and he showed us… no wait… he literally capered from shelf to shelf, indicating a map of Ireland with a shamrock-laden Leprechaun’s hat perched precariously on it; elsewhere, printed quotes by WB Yeats, one of which he discussed at length.

He was very handsy, but not suspisciously or creepily so – he’s just a really nice guy, who happens to love what he does.  I asked him if he had any books in Italian suitable for ‘an idiot’.  He cackled at this, and showed us a couple of novels.  With each one, he showed us the synopsis blurb on the back, and not only read it out, but mimed it too.  Bless him, he was like Mr. Rogers on crack.

I ended up buying a chick-lit book in Italian.  Two reasons right there why I won’t be reading it today or tomorrow – so he got his sale!  We signed his guestbook and went back outside.

I don’t know how much money he makes, but he seems a great deal happier than most people I know.  I’ll be back.

There are a couple of wineries which have stores in Volterra, which sell directly to us great unwashed.  One of these is Santa Lucia, which is a farm about a 40 minute drive, north-east of Volterra.  Not too sure about their whites, but their reds (I think) are 100% San Giovese, and so are very drinkable.  And cheap.

You can waltz in, and sample up to 5 or 6 wines, and then take home what you fancy.  The wines are there in vats.  You can either get a bag-in-box or bring your own bottles, and fill them up like you would a car with petrol.

There’s another place outside town (Cantina di Fabio) that does this too, but they do 8 litre bags, and given that it’s an uphill struggle to the apartment, we tend to stick with Santa Lucia.

I wrote a little bit in the afternoon, and lazed some more.

That evening, Niamh served up gnocchi, with mushrooms and smoked pancetta (bacon lardons, essentially) in a cream sauce.  It was yummy – next time we’ll had something with a fresh taste to offset the other flavours – parsely or peas, maybe.  But look how tasty this is! 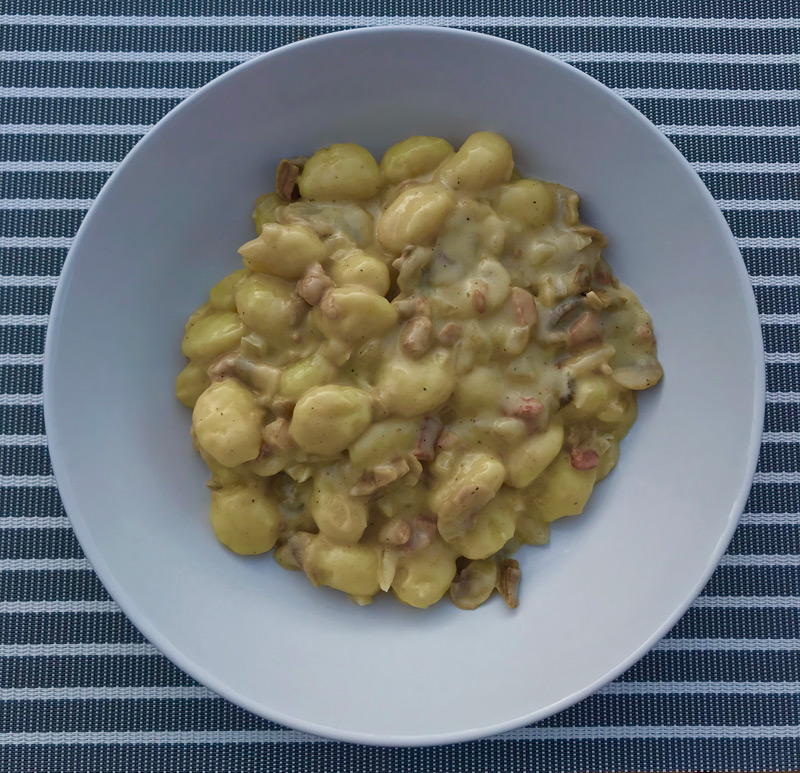 I’m sorry to say we stayed in all night.  I looked at telly for a bit, finishing off the John Callahan biopic “Don’t Worry, He Won’t Get Far on Foot”, on Amazon, and the next ep of Orange Is The New Black on Netflix.  The movie was really good – give it a go – but OITNB is still a bit rubbish (although this episode was better than the previous one).

Despite being early to bed, I woke up tired, and thought I was going to cut short my walk, but I gave it a bash anyway, and went a particularly hilly route.

Not sure what the plans are today – maybe head up to Lari to check out the producer of one of the poshest pastas in Italy: Martelli.

2 thoughts on “Booze and Books”