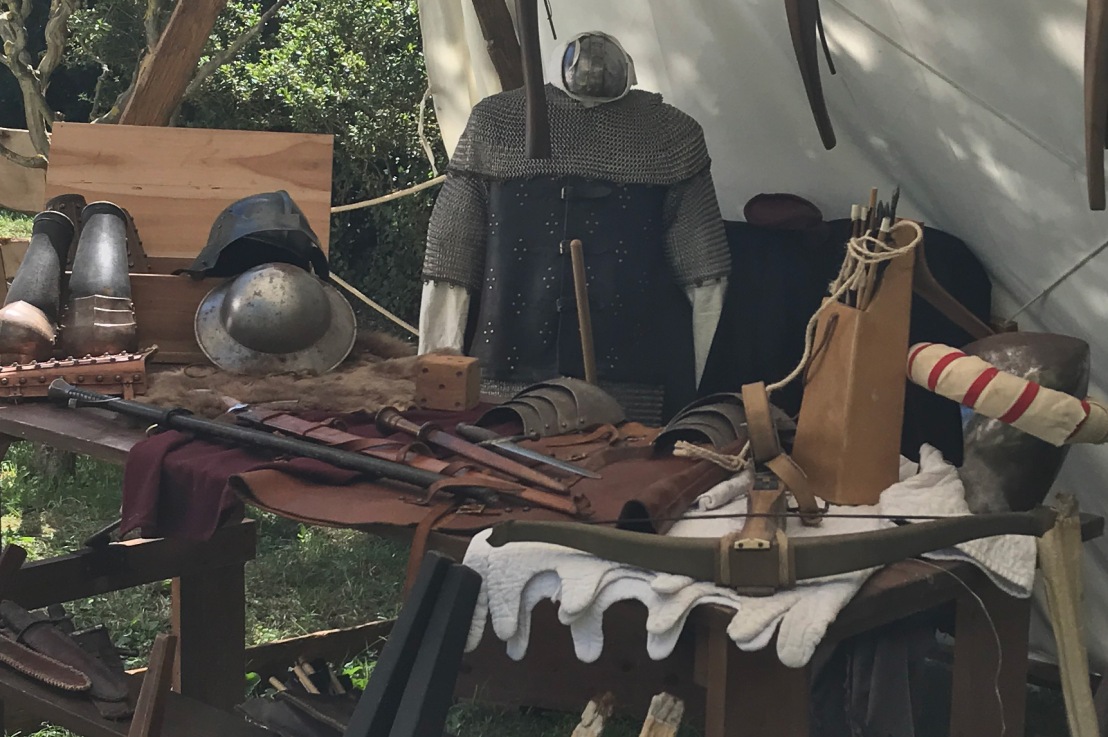 I’ve had to split this into two parts – both are reasonably photo-heavy. I’ve linked to some movies in public posts on Facebook.

I took to wearing shorts for the day, which is nearly unheard-of for me, but it was just as well – it was a very hot day.  We took ourselves outside and marched up to the ticket booth, after which we had to present ourselves for our re-entry band.

And then we went off to explore the stands.  I’ve never seen anything like it.  You hear of Renaissance Fairs in the US, and I suppose this is something akin, but when you have the setting of an actual medieval town, it makes it so much more special.  At times it was like walking through a movie set.  And fair play to the townsfolk, they were so into it, and many of them dressed up for their stalls, but also to just wander the streets, adding flavour and believability to the whole festival.  We exchanged some Euros for Grossi, the currency of the day, and used for purchases in the festival.

There were costumes for hire for the day.  We didn’t hire them today, but maybe it will be cooler next Sunday and we might be persuaded to grab some then.

There were stalls for food, and then various craftsmen showed how goods were made all those years ago – from hammering out delicate earrings, to demonstrating how salt was extracted from the source not too far from the town.  Volterra is still well-known for its salt.  Some scribes were drawing and performing delicate lettering, and there was even a medieval hospital set up!

Turning the corner to Via Roma, you could see stall after stall of wares, food and drink.  When you add in the backdrop of the arch between the two towers (everything has a name, I sadly can’t remember what the names of those two towers are – sorry!), it all felt more real.

Then we went off to the park.  There was a similar setup there, but in a more bucolic setting, along with more unique stuff like smithing, and crossbow and shortbow ranges (which I never got around to trying, dammit – maybe next week).

The layout of the itinerary looks foreboding at first, but you see that many of the items are repeated, allowing you to stay in one location for much of the day to view most of what’s on offer, or alternatively bounce between locations to catch repeats.  In addition, there were a couple of marching bands who roamed the roads between acts, keeping everyone entertained (and on their toes), as well as stilt performers and a jester/magic act.

But there were some specialised performances that demanded either the square (dancing lessons) or the park (falconry exhibition) – see Part 2 for these, so sometimes you just had to travel.  It’s murder on your Achilles getting up that slope to the park!

We were both roasted by this stage, and so went back to Via Porta all’Arco for  a granita, and then grabbed sandwiches to see off our hunger.  My one (in the background, with sausage meat and fried onion) was particularly yummy.

We needed a bit of a break, as it was getting extremely warm, and so went back to the apartment. It was so hot, that the fan was on the cusp of turning from friend into enemy. We struggled through our ‘rest’, and eventually headed out for the early evening part of the show. See all this in Part 2!