I dropped the bin down yesterday, and bumped into our neighbour, who’d been at the seaside for the last month.  His skin was as brown as an oak’s.  Fair play to him.

While I sat in and wrote, (the guts of 1,000 words – yay me!) Niamh went out for a walk.  She took a route I’m unfamiliar with (there aren’t many of those), in and around the south-end of the urban stretch, near the hospital.  She found that there are plenty of abandoned/closed buildings around there.  I guess these all must have been part of the overall complex that comprised the mental hospital – as there were 6,000 patients/inmates in there at one stage.  She took some pics.

For lunch, Niamh had some mixed meats and salad.  I continued my quest to sample as many street-food vendors as I could.  I stopped on the way, at Ristorante Enoteca Del Duca to book a table for two for Friday night, to help us celebrate a special occasion.  I’m looking forward to this – Del Duca has the best technical cooking in Volterra, and a fab selection of wines.  Anyway, my eventual destination was far from Del Duca; it was Mesopotamia, to be exact… Mesopotamia Doner Kebap!  It’s a simple Turkish kebab style place, but unlike other eateries, this place often stays open super-late.

I grabbed one of their kebap sandwiches and took it home.  The photo makes it look a little dry, but it was quite tasty – I added a little cabbage, salad, hot sauce and sour cream.  The meat isn’t bad at all – definitely a couple of steps up from the savaloy we’re used to over in Ireland.  For €4, I’ll be having one again! 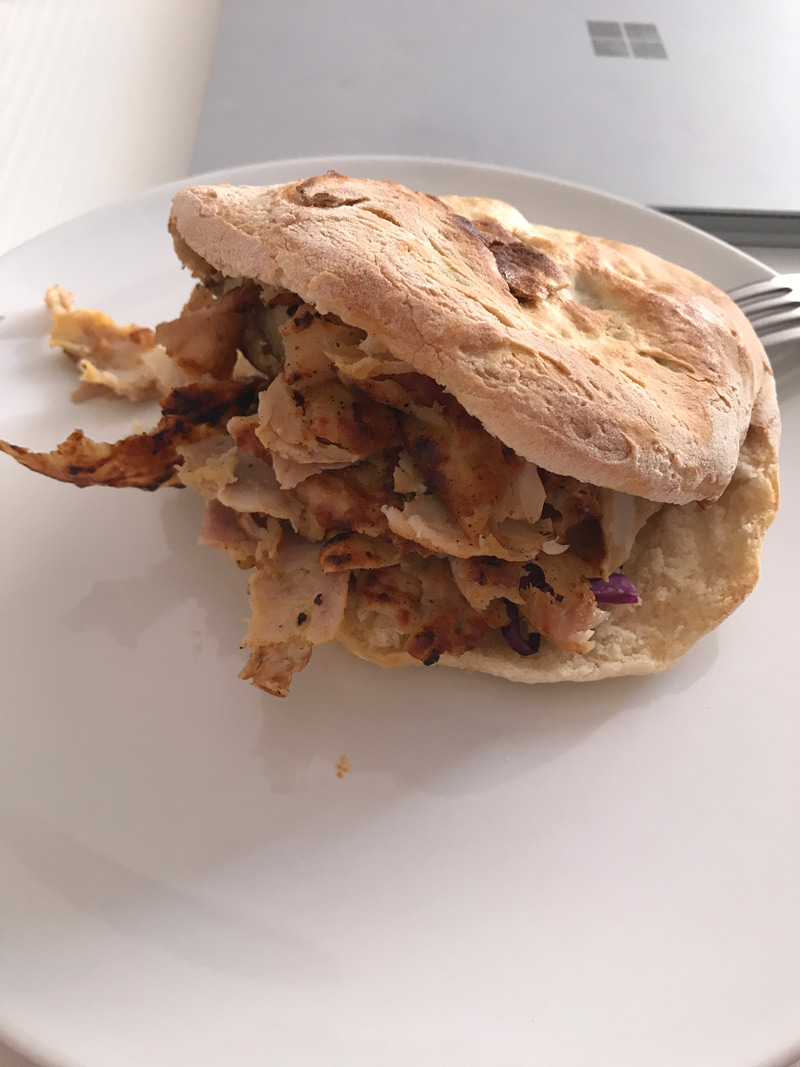 We crashed for a while that afternoon – while boggling over the news in Britain – and then had to call into our property managers to see if she could assist us in setting up a direct debit for our internet service provider (TIM).  We thought we’d set one up before, but when we arrived back in April to spend 2 weeks in the apartment for the first time, we found that we’d been cut off, and had to go to a Tabacchi to pay the outstanding bills manually.

We got partially set up, but they have a blocker on completing the process, unless it’s done from our own Wifi connection with them.  We went home and did this, and we *think* we’re set up!  The lady at the property managers also called the furniture store in Navacchio to see when our stuff might be delivered.  They (eventually!) said that they would call back within 48 hours with a date.  They used the fact that we are in a Centro Storico (historical centre) to add bureaucracy, even though we pointed this out to them when setting up delivery in the first place.  Anyway… fingers crossed the delivery occurs soon.

We had our evening meal (some of the soup I cooked a couple of days ago) earlier than usual – around 18:30 – and sat in for a while, before heading out to Antica Velathri Cafè for a drink.  I had a couple of cocktails (Long Island Iced Tea variant (without tequila) and an invented cocktail with Kahlua.  He made the latter fun by attempting to roast coffee beans in the foam at the top of the drink, but the torch burned them and made them a little bitter.  Still, we had a good laugh with it, and the drink itself was nice.  Niamh had yummy Moretti – one of the few beers I actually will drink.  I still lament that Volterra (indeed, much of Italy) is devoid of cider.

This morning, I decided to do a full walk of the walls again (about 4.5-4.7km).  Halfway through, Niamh (who was jogging) frightened the living crap out of me by tapping me on the shoulder, as she moved past – the disadvantage to wearing noise-cancelling earphones!

And after having just completed it, I feel fantastic, but am in desparate need of a shower!

No plans today.  I might suggest somewhere out-of-town for lunch, but we’ll see.