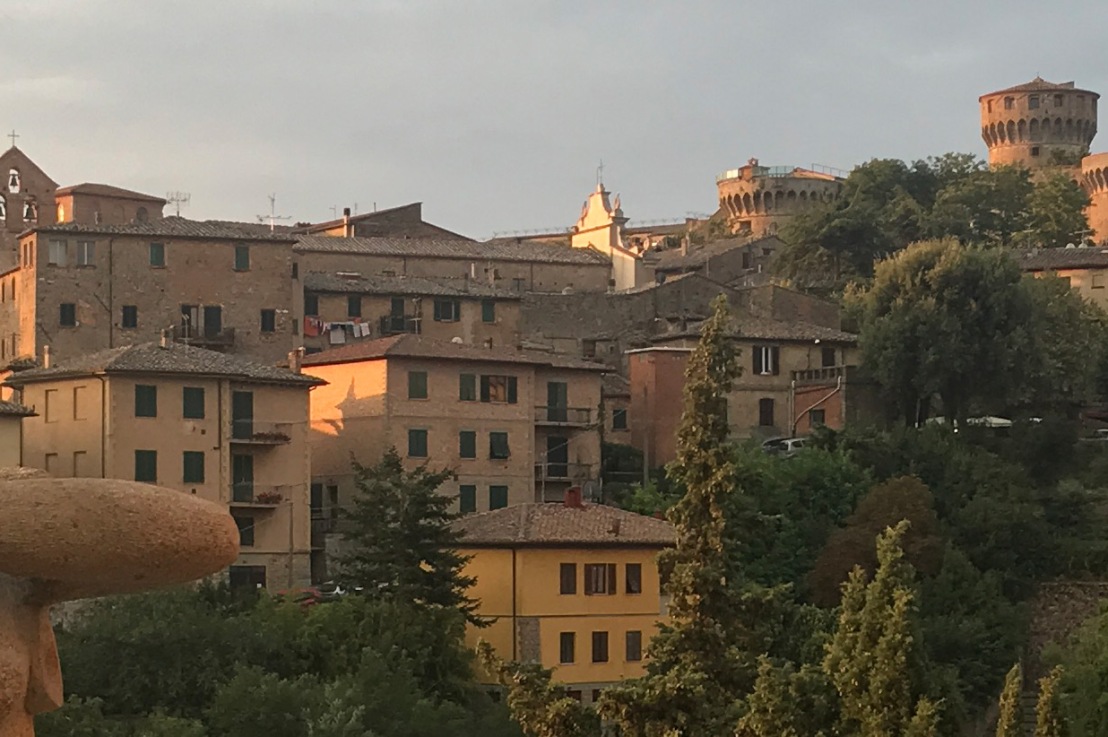 The departure of our guest means that we are settling back into main pattern of living, rather than holidaying – so we can see how much one can survive on here per day.  This means that (a) we do not work, and (b) we sit on our fat cans for much of the day.

In fairness to us, we often go out exploring, but the weather is supposed to be dismal for nearly the next week, so it would make exploring a bit of a chore.

Yesterday after my walk, I wrote a blog, showered and settled in for some screen watching – occasionally examining the cloudscape outside.  When it came close to lunch, Niamh stayed behind, while I went outside to do some shopping for food.  I bought some cold cuts and tomatoes for Niamh, drinks for the pair of us and went into one of the touristy produce stores to pick up a wheel of pecorino, aged in walnut leaves (yum!).  I’d been wondering about other types of Italian street food, and so strolled to one of the eateries on Minzoni, and grabbed myself an arancino (deep-fried rice-ball, with cheese and minced beef) and some sort of roll I thought was stuffed with bacon and cheese.  It wasn’t, it had a little bacon, but was very bready.  I’d skip that next time, but I’d have the arancini again!

There’s a place on all’Arco which serves granite, and other Neopolitan street food – I might give that a go today.

That afternoon, we pretty much did what we did in the morning – chilled.  The most exciting thing to happen was that the thunder kicked-in, but there was no rain – instead, we lost power for about 15 seconds.  Not awful, but I was in the middle of streaming a movie on SkyGo.  It honestly took 30 minutes to get all our devices working again after multiple phone, TV, laptop and router reboots when the power came back.  That was the worst of the forecasted storms, though.  It got a little cooler, but that was welcome!

We used up another portion of the ragú Niamh made a while back, with large shell pasta.  The ragú was nice, but the pasta (although nice and toothsome), was not the right shape – the sauce definitely works better with long, string-type pastas.  We’d been a little naughty the previous day and bought bottles of Disaronno (an almond liqueur – like liquid cake!), and Limoncello.  I poured myself a decent measure of the Disaronno, and after finishing both it and the dish-drying went out on my own.

I stopped off in Antica Velathri Café for a Moretti and had a conversation about why the barstaff in Marina di Cecina didn’t know what I meant when I asked for an Amaretto (of which Disaronno is an example).  It turns out two things are important:

Anyway, he generously gave me a couple of samples of Amaretto biscuit to go with the cantuccini (hard biscuits) with Vin Santo (dessert wine that often tastes not unlike communion wine) I ordered.  The cantuccini were made in-house and were nice.

I got to practice a littler Italian, but I had to resort to translation and English.  I need more opportunities like this with someone as generous as the bartender!

We watched an episode of Orange is the New Black when I got home.  Too many characters, with storylines spread too thinly.  Probably a good thing it’s ending – watching it has become a labour of love.

This morning, I forgot my water bottle, and so just went on a quick walk around the centre of town.

There’s another yellow weather warning here today, so nothing huge planned.  I didn’t get any writing done yesterday, so I hope to get some done today.  A young Italian lady contacted me re my blog, and has a project she’s trying to finish – she’s asked me some more questions about my impressions of Tuscany and how I’m integrating, so I’ll help her with that today too.